If you use glue for basting you will love this simple tool.

It gives you a nice thin line of glue and comes out nice and smooth.

I used it for an applique project and it worked like a charm. I was able to easily get under all the edges with no problems and it went pretty quickly.
You can buy them online at Purple Daisies here. They are a package of 2 for 10 bucks - well worth it.
(I have no affiliation and they have not asked me to give a review. I just wanted to share something that works)
I hope you all had a nice thanksgiving and that you can spend some time relaxing and sewing on Black Friday. If you are on Twitter or Instagram search for #bfsi or #blackfridaysewin to see what others are doing.
Enjoy!

Posted with Blogsy
Posted by quiltedfabricart at 6:57 PM 1 comment:

Read last weeks post for an explanation of the OM symbol. The one from last week hangs in my home.

This one is for sale in my Etsy shop here

The quilting doesn't show up as good as the previous because there is more of a print. I think in the future if I want to showcase quilting a solid or tonal works the best.

I showed you my cartoon like Zu Zu (my dog) a couple weeks ago - photo on top.

Since then I darkened under the ears and wanted to show you what a difference that one thing made.

I can't believe it's almost thanksgiving already! We have had a very good November here in Vermont. It's usually dark rainy and gloomy most every November day but this year we actually are getting a lot of sunny days. Today in the 50's!

I will be doing my favorite thing - taking a walk with my dogs through crunching leaves covered trails.

We have to watch where we go though since it's hunting season.

Get out there and enjoy it while it lasts!

Posted with Blogsy
Posted by quiltedfabricart at 5:51 AM 1 comment:

Ommm. It’s often the first and last sound in your ears in a yoga class. But what does it mean? Perhaps you’ve heard it defined as “the sound of the universe” — but what does that really mean?

For starters, it’s all about sacred threes. Most faiths have trinities in their roots and Hinduism, where om was born, is no different. Even though it’s usually pronounced seamlessly so it rhymes with “home,” om is made up of three syllables: A, U, and M, or, phonetically, “aaah,” “oooh,” and “mmm.” Experts say these syllables can represent a slew of trios, including: the heavens, earth, and the underworld; the Hindu gods Brahma, Vishnu, and Shiva (aka creator god, sustainer god, and destroyer god); and the waking, dreaming, and dreamless states — “to represent all of consciousness,” says Yoganand.

Some scholars say that the shape of the visual om symbol embodies each of its syllables — the three is the Sanskrit letter for “ahh,” that same three with the mini S on it is “oooh,” and the bindhi and half-moon at the top are the “mmm.” Some say the symbol is connected to Ganesh, the Hindu half-elephant god who removes obstacles, because if you squint, you can see his rotund curves and graceful trunk represented.

For my art quilt OM symbol I used a plain background that goes well with my wall color and went with white as it gave a good contrast. Goddess tears free motion quilting ended up working really well.

I'm very happy with how this one came out and it hangs over my fireplace. ( my peaceful place)

Had so much fun with this one I started another and will show you next week.

With all the crap that's been going on the last few days - take some time to clear your mind - start over and let's just make the best of the path we have been given.

(And whatever your God or goddess, some praying couldn't hurt)

Posted with Blogsy
Posted by quiltedfabricart at 6:22 AM 4 comments:

Jill Buckley has inspired me many times from things she has been making and shares on her blog. This week she was recycling old sweaters into mittens. I found the video she used and it's really pretty easy. And they are lined with fleece! Something needed for the cold winter that is coming.

You use the cuff from the sweater you are cutting up for the cuff of the mitten.

I had this gorgeous felted wool sweater to small to wear in my closet for years just waiting for the right project. It didn't have sleeve cuffs so I improvised and used the top part of a sock.

There is a link below the you tube video made by roman cake designs that takes you to her blog where there is a free downloadable pattern. The pattern is for a small to medium.

I suggest before you use your nice sweaters to make one with something you don't care if you have to throw it out due to "the learning experience" my first one was way to small so I added a half inch all the way around the patterns and then made this pair out of denim.

Making this denim pair I realize that you really need the softness and cushiness of a sweater. See what happens by the thumb part? This may have been my mistake in sewing but using a sweater you probablly wouldn't even notice.

If you live in a cold climate you really should try this.

I know you have a favorite sweater in your closet you can't or don't wear anymore.

Posted with Blogsy
Posted by quiltedfabricart at 5:08 AM 1 comment:

patterns for sale on craftsy 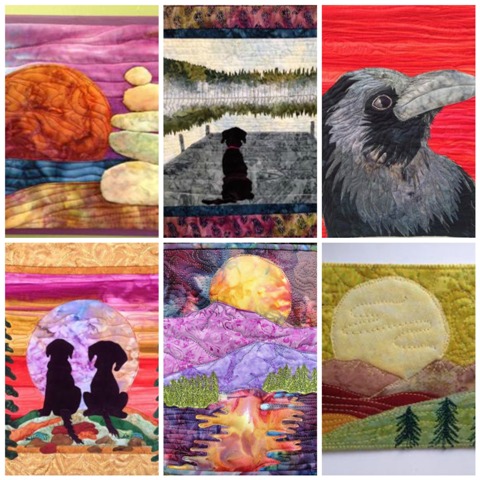